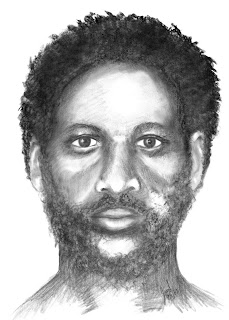 These remains were found on January 16, 2003 under the eastbound span of the Roosevelt Bridge.

The forensic examination of these skeletal remains indicate the death occurred about six months prior, sometime in the Summer of 2002.

A cause of death was not determined.

A forensic anthropologist determined that these remains are of a black male 30-39 years old, 5'7" to 5'8", and he had an unusual bony growth on the upper left side of his mouth.

This growth (exostosis), would have given him the appearance of a swollen cheek or face. He likely would have had difficulty speaking or eating.

The scene where he was found indicated that he likely was homeless.

The drawing should fairly accurately reflect the bone structure, proportions, and measurements of this person's face.

The drawing shows facial hair. This is based on the premise that he was homeless, and many homeless have this length of facial hair.

If you can help identify this person, please contact United States Park Police Detective Kevin Fornshill at (202) 610-8751.
Posted by Sergeant Anna Rose at 10:32 AM

Andrew Dunn, a 47 year old Silver Spring, MD resident, was arrested by the United States Park Police and charged with “Assault with Intent to Commit Murder.”

This arrest stems from a road rage incident on Sunday November 7, 2010.

Andrew Dunn and another driver were on Powder Mill Road near the Baltimore Washington Parkway on November 7 at about 4:30 pm when they exchanged words after the victim was reportedly almost run off the road.

After that, both drivers drove away with the eventual victim, following Dunn and talking with the police dispatcher, describing what happened. A short time later, both drivers came to a stop, and Dunn fired a handgun at the victim.

The gunfire did not strike the victim or his car.

The victim was able to provide US Park Police Detectives with identifying information and a description. The Detectives tracked the suspect with this information.

On Tuesday November 9, 2010, United States Park Police Detectives and SWAT Team executed a search warrant at Dunn’s home in the Briggs Chaney area of Silver Spring and recovered evidence linking him to the crime.

Dunn was arrested and charged in United States District Court for the Southern District of Maryland.

Dunn is being held pending further court proceedings.
Posted by Sergeant Anna Rose at 9:32 AM 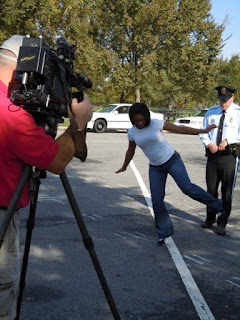 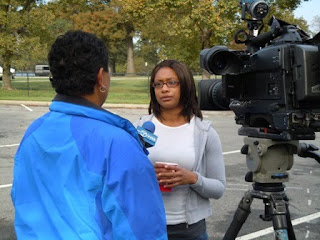 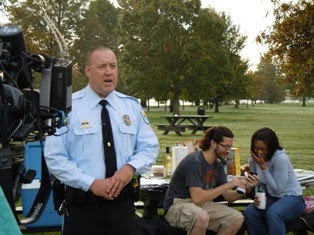 The United States Park Police and the Washington Regional Alcohol Program teamed up for the kick off of Operation Checkpoint Strikeforce to combat drunk driving.

This effort is designed to combat the scourge of drunk driving with a particular focus of the increase of offenses in the upcoming holiday season.

For this event, we had a strong media presence getting our message out. We featured highly visual demonstrations of what drunk drivers look like and how their psychomotor skills are impacted.

Officers from the United States Park Police Traffic Safety Unit solicited volunteers to consume measured alcohol doses and submit to period testing of breath alcohol levels and Standardized Field Sobriety tests. These results vividly demonstrated to the reporters the challenges in detecting drunk drivers, but also the skills police officers have developed in combating these offenses.

The demonstration included drivers navigating a cone course while wearing “Fatal Vision” eyewear. These lenses simulate a specific blood alcohol level, in this case .17% bac. Many cones were knocked down; each could have been an innocent pedestrian.

While many may think that getting volunteers to drink alcohol is just a fun way to spend a day, the reasons are deadly serious. The volunteers seemed to enjoy themselves, but they were required to submit to stringent internal controls. These volunteers were required to be transported to and from their homes by police personnel, submit to a basic medical screening before and after the event, and were precluded from operating any vehicles for a specific time period.

This event happened on Hains Point in Washington, DC. Since this area is declared off limits for alcohol consumption by the Superintendant, the United States Park Police received a waiver for the event to allow only the two volunteers to drink for educational and public awareness purposes under close monitoring.

We would like to thank our partners in the National Park Service National Capital Region, Washington Regional Alcohol Program, and Stratacomm Communications for spreading the message of the hazards of impaired driving.
Posted by Sergeant Anna Rose at 10:27 AM