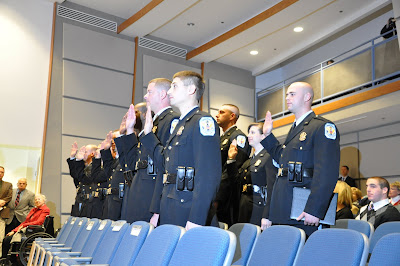 The United States Park Police would like to welcome eighteen new officers to its ranks. These officers received their badges from Chief of Police Lauro on December 18, 2009.

Congratulations to all of them. They put an enormous effort into this accomplishment.
Posted by Sergeant Anna Rose at 1:42 PM

In Memory Of Fallen Officers 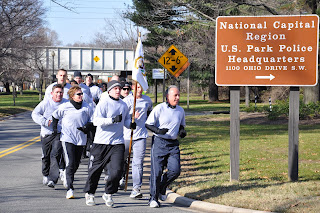 The eighteen new officers joining the ranks of the United States Park Police had their last training run as recruits downtown around the monuments and memorials they will soon protect.

Physical fitness is paramount for police officers and this run only added to their high level of conditioning.

Fitness is critical, however equally important is the sense of community all officers must share. This family of law enforcement must never forget those officers who gave their lives serving with us. The new officers were told of those United States Park Police officers who made the ultimate sacrifice for the people they serve.

Bringing this point home firmly was the presence of the surviving son of one of our fallen.

Hakim Farthing died in the line of duty on August 10, 2002. He is survived by his now eleven year old son, Eric.

Eric met the new officers and followed them as they ran the National Mall. When the runners finnished at Headquarters, Eric was presented with the recruit class "guidon."

This run clearly established the link all of us have with those who served before.

Eric will always be part of our family. 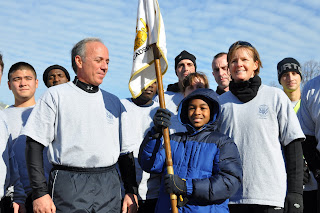 One person died in a crash on the Suitland Parkway.

This crash happened on Monday December 14, 2009 at about 6:37 am eastbound Suitland Parkway at Meadowview Drive, which is between Silver Hill Road and Forestville Road in Suitland, Maryland.

The other vehicle involved in the crash was occupied by an adult female and a baby, both of whom sustained non life threatening injuries, and transported to Southern Maryland Hospital in Clinton, Maryland.

Any witnesses are asked to contact the United States Park Police Criminal Investigations Tip Line at (202) 610-8737.
Posted by Sergeant Anna Rose at 11:11 AM

One person is dead following a car crash northbound on the Baltimore Washington Parkway at Maryland Route 198.

The crash involved one vehicle occupied only by the driver. The car left the roadway and struck the stone bridge abutment head on.

The driver, David A. WEEDON, 52 years old from Laurel, Maryland, died at the scene.

Any witnesses to this crash are asked to call the United States Park Police Criminal Investigations Branch "Tipline" at (202) 610-8737.
Posted by Sergeant Anna Rose at 9:17 AM