The following items will be prohibited ath the concert: 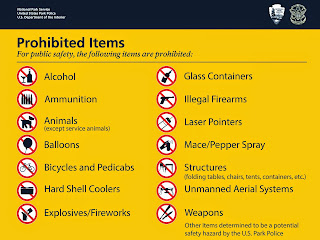 The following additional items are prohibited within the reserved seating and ticketed areas of the concert, the area approximately from 3rd Street to 6th Street, between Madison Drive NW to the north and Jefferson Drive SW to the south.

Road Closures and Logistics Announced for Concert for Valor 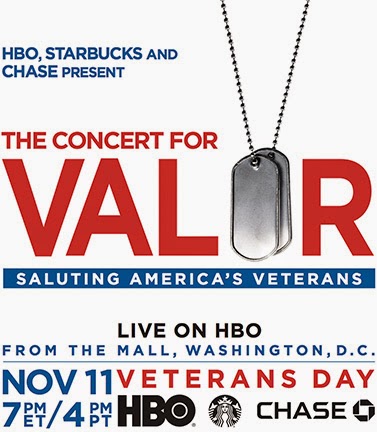 
Washington –The National Park Service and the United States Park Police in cooperation with local, state and federal law enforcement, public safety and transportation agencies, have developed security, logistics and access plans for HBO's permitted Concert for Valor. The concert will take place on Tuesday, November 11 from 7-10 p.m. on the National Mall. Click here for a map of concert venue, including road closures and access points.

The following roads will be closed and off-limits to vehicles starting at 6 a.m. on Tuesday, November 11:


Additional closures will be in place in advance of the concert to allow for setup of the venue. These include:

Concert-goers are strongly advised to use public transportation.

All Metro stations will be open from 5 a.m. until midnight on November 11 EXCEPT Smithsonian, which will be closed because it is within the security zone for the concert. Selected Metro stations near the National Mall will remain open after midnight, if needed, until all passengers in line are accommodated. See Metro's Concert for Valor Metrorail Service Information page for full details.

ADA shuttle bus service will be provided from 10 a.m. until 11 p.m. on November 11 for concert attendees. Prearranged ADA parking is available at RFK Stadium Lot 3. Passengers in need of ADA service and their attendants will be dropped off on Independence Avenue SW at 6th Street SW. Parking and transportation arrangements can be made at www.ustreetparking.com.

The following public entry points will open at 10 a.m. on Tuesday, November 11, 2014, and will remain open until the concert venue can no longer accommodate additional people.


The following public entry points will open at 2 p.m. on Tuesday, November 11, 2014, and will remain open until the concert venue can no longer accommodate additional people.

All attendees, including general public and ticketed guests, are subject to a thorough security screening before entering the concert venue. Please allow additional time for the security screening, as it is expected that lines may be long.

To receive text alerts, advisories, traffic information, and additional updates about the concert via the Nixle community information service, text VALOR2014 to 888777.

The following items will be prohibited at the concert:

For information about the Concert for Valor, including lineup and schedule for the show, visit www.theconcertforvalor.com.
Posted by Sergeant Anna Rose at 3:17 PM