A woman was assaulted in Rock Creek Park during a morning jog.

The victim of this assault was jogging along the bike path in Rock Creek Park near Bingham Drive on July 22, 2009 at about 7:00 am. The initial assault involved her being grabbed by the assailant.

United States Park Police Detectives are seeking information about this assault. We are looking for an Hispanic male in his 30’s about 5’7” to 5’10” tall. He has a stocky or large build, wavy shoulder length black hair, he seemed to be unshaven, and he smelled of alcohol. He was wearing a cotton t shirt and jeans.

Prior to her being assaulted, the victim recalls passing this suspect on the trail and heard him talking to himself in Spanish.

We would like to talk to anyone who may have any details to add or may have seen this suspect or crime. Please call the United States Park Police at 202-610-8737. We will be able to translate any information provided in foreign languages.
Posted by Sergeant Anna Rose at 7:23 PM

One driver was seriously injured in a single vehicle motor vehicle crash on Beach Drive.

United States Park Police Officers responded to this crash on Beach Drive just south of the District 3 Substation on July 21, 2009 at about noon.

Officers found that a Jeep had rolled over leaving the lone occupant pinned in the vehicle. A large volume of automotive fluids were also spilled and were contained prior to flowing into Rock Creek.

The District of Columbia Fire Department dispatched an Engine Company, Truck Company, Rescue Squad, Medic Unit, and Command Officials to the scene. These Fire Department units performed a difficult extrication and found the patient suffering from multiple injuries. This patient was flown by United States Park Police Aviation to a local Trauma Center.

When this crash occured, the vehicle also contained two Schnauzers. These friendly dogs were taken by District of Columbia Animal Control for safe keeping after Fire Department staff fed them dog biscuits to gain their trust.
Posted by Sergeant Anna Rose at 12:35 PM

The United States Park Police is seeking assistance in locating a critical missing juvenile. The missing person is:

This person has been found. Thanks for all assistance!
Posted by Sergeant Anna Rose at 7:12 AM 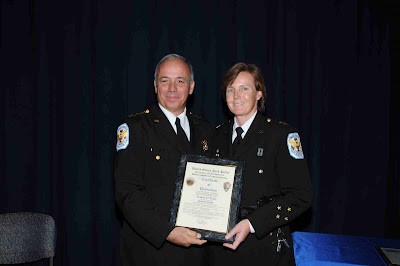 Jeanne O’Toole has been promoted to Deputy Chief of Police for Operations for the United States Park Police.

O’Toole began her career with the National Park Service in 1984 as a seasonal park ranger at Gateway NRA in New York.

In 1987, she entered service with the United States Park Police. She began her career as a uniformed officer in the Glen Echo Station, during which time she was detailed to an assignment as a plainclothes drug officer. While in this plainclothes assignment, O’Toole and her unit received a unit citation award from the chief of police for making 180 arrests in six months, primarily in Meridian Hill Park in Washington.

Promoted to Captain, O’Toole Commanded the West District and was the Assistant Commander for Criminal Investigations.

When O’Toole was promoted to Major, she served as the Commander of the US Park Police Criminal Investigations Branch.

As Deputy Chief, O’Toole is responsible for a large segment of the United States Park Police.

O’Toole is a graduate of the FBI National Academy (Class 209), has received a masters degree from Columbia University in New York, and was a facilitator for the National Park Service leadership seminar program.
Posted by Sergeant Anna Rose at 7:46 AM

These absconders were reported to the United States Park Police at about 2:45pm.

A United States Park Police Officer searching the area of the Baltimore Washington Parkway near Maryland Route 198 saw six juveniles matching the lookout, stopped to investigate, and these six attempted to flee on foot. One absconder struggled with this officer, was able to break free of him, crossed the roadway and joined three others hiding in a drainage pipe.

All six were returned to the New Beginnings facility.
Posted by Sergeant Anna Rose at 7:33 PM

On July 4th at about 8:45 pm, a United States Park Police Officer was patrolling Anacostia Park in the area of Good Hope Road. This officer was flagged down by a female DC resident who pointed to the occupant of another nearby car. This woman stated that she was being stalked by that other person.

As a result of this investigation, Marion Barry, was arrested.

United States Park Police Detectives consulted with the United States Attorney’s Office for the District of Columbia and subsequently placed the charge of “Misdemeanor Stalking.”

Mr. Barry was interviewed at the United States Park Police Criminal Investigation’s Branch and released on citation with a mandatory court appearance in the Superior Court for the District of Columbia.

This release was made after consultation with pretrial services for the District of Columbia.
Posted by Sergeant Anna Rose at 5:07 AM 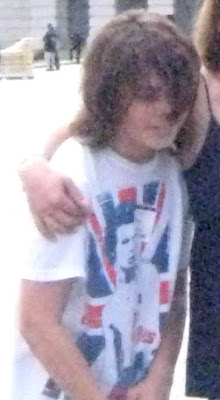 Julien Pope, a white male 13 years old, 5'1" 120 pounds with shoulder length brown hair and light brown eyes is missing from the area of the Smthsonian Metro Station in Washington, DC.

JULIEN POPE HAS BEEN LOCATED AND IS SAFE.

THANK YOU FOR YOUR HELP IN CLOSING THIS CASE.
Posted by Sergeant Anna Rose at 12:45 AM

Do's and Don'ts for the 4th of July Celebration

Do bring lots of water. Dehydration can make a great day not so great quickly. When you get thirsty, you are already getting dehydrated, so sip water frequently.

Do bring sunblock. A bad sunburn will ruin an otherwise enjoyable day.

Do bring some food, but be aware of foodborne illnesses and pack accordingly.

Do bring a Metro Farecard with sufficient balance on it to get home. Waiting in line at the end of the event is no fun.

Do report any suspicous activity to any police officer or uniformed National Park Service employee. We take all reports seriously and welcome the partnership with our community to make this a safe and enjoyable event.

Don't bring firearms, fireworks, alcoholic beverages, glass bottles, tents or other dangerous items. All people and packages are subject to examination to make this event safe for all of us.

Most of all, bring all your family and friends. There is a lot to do other than watching the fireworks. Make certain to visit the White House Visitor's Center for some special events. The National Mall also will host the Folk Life Festival.
Posted by Sergeant Anna Rose at 9:53 AM

Traffic Closures For The 4th of July

There will be numerous traffic closures in Washington, DC and Virginia to facilitate the 4th of July.

The following roads will be closed by the United States Park Police and Allied Agencies.

From Noon until Midnight:

• Ramps from Pentagon parking lots to Rte. 110
Posted by Sergeant Anna Rose at 9:32 AM