A powerful line of thunderstorms pounded Washington, DC at the height of morning rush hour August 12, 2010.

This cell passed through at about 7:30 AM. As it approached, the sky became so dark that it appeared night had fallen.

Many trees came down in the Metropolitan area with the District 3 area in Rock Creek Park especially hard hit. Beach Drive was closed its entire length.

Most treacherous were the flash floods. Several vehicle along the Beach Drive corridor were swept away by the flooding. Fortunately there were no injuries.

Bradley Broadus, a District of Columbia resident, was driving his mini van on Broad Branch Road near Brandywine Street.

Mr. Broadus relates, " I looked in my rear view mirror, saw a wall of water coming at me, and bailed out of my car. I scrambled up the hill and clung to a fence when my car washed downstream."

Mr. Broadus' car was found about a quarter of a mile away against the supports for the bridge carrying Ross Drive over the creek.

Officer Farrell of District 3 arrived and waded through high rushing water to see just a corner of the vehicle poking above the torrent. She said that the water was above her knees at the peak of this flood. She was able to break a rear window attempting to see if anyone was in the car. Shortly, Mr. Broadus came down the road to report that he owned the car and that no one was in it.

Within about one half hour, the waters receded to more normal levels and Mr. Broadus' car was winched out of the stream. The District of Columbia Fire Department Rescue Squad 2 personnel assisted in this recovery. While the water had receded substantially, they assisted by hooking the car to the tow truck, stood by if any recovery people were hurt, and monitored the creek for any hazardous spills that may have gone into the water.

The photos show the final resting of Mr. Broadus' car, the DC Fire Department hooking up the car, the amount of damage flash floods can cause, and a very lucky Bradley Broadus!

To get a sense of how deep the water was, when looking at the photo of the car against the bridge, the water was several feet above the bridge deck, about midway up the railing! 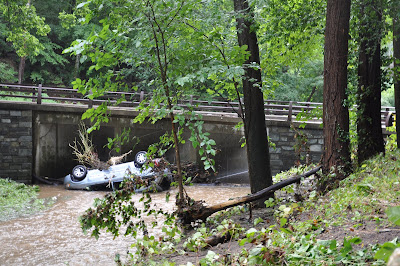 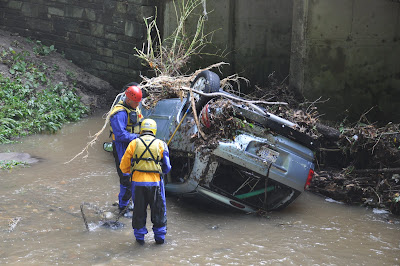 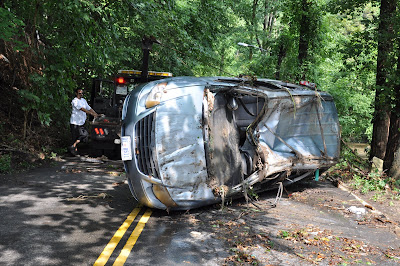 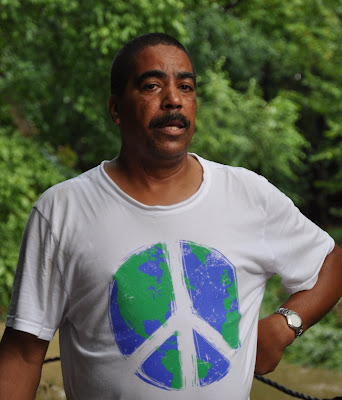 Posted by Sergeant Anna Rose at 11:18 AM