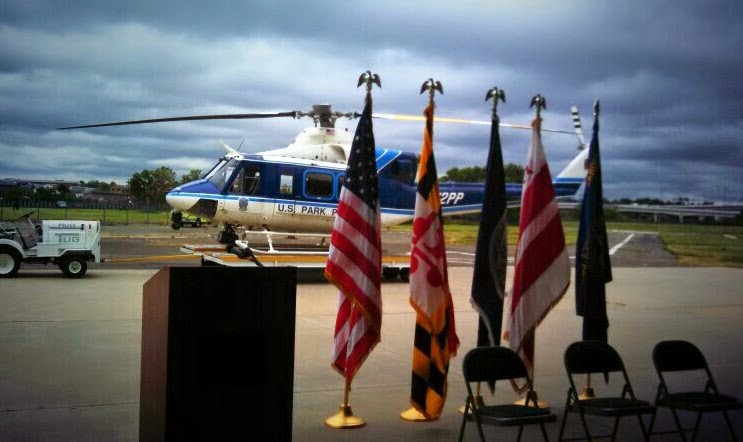 On June 12, 2014, the National Capital Area Council, Boy Scouts of America (NCAC,BSA) on behalf of the Boy Scouts of America National Office presented Navy Captain Edward "Chip" Zawislak with the Honor Medal with Crossed Palms, the highest recognition granted by the Boy Scouts. Captain Zawislak is a Boy Scouts of America Scoutmaster of Troop 903 in Calvert County, MD, and was also a victim of the September 16, 2013, Washington Navy Yard shooting. He was stranded on the rooftop of the Building 197 with gunshot victim Jennifer Bennett and Makonnen Eyob and Michael Jackson.

The ceremony was hosted by the United States Park Police at the Anacostia Aviation Hanger, The Eagles Nest. The importance of the ceremony location with the Eagle closely behind and Navy Yard Building 197 in the background brought back many memories for those present.

Attending the ceremony in support of Captain Zawislak was, Makonnen Eyob, U.S. Park Police Officer Matthew Cooney (who aided in the medical care and rescue of those stranded) and shooting victim Jennifer Bennett.

﻿ ﻿
On May 31, 2014 United States Park Police paid their final respects to Master Patrol Officer (MPO) Craig Lane who passed away on Monday, May 5, 2014, after battling brain cancer. MPO Lane proudly served with the Marine Corps and worked diligently as a United States Park Police officer for 17 years. The memory and legacy he left behind will act as a great comfort to those touched by his dedication and kindness.

MPO Lane will be remembered for his acts of bravery, passion for his job, great cases he made during his law enforcement career, how much he loved the Marine Corps and his country, hunting with his brother, and spending quality time with his family.

Craig's honorable and faithful service to this country and to the Nation's Capital (as a member of the U.S. Park Police) is a proud legacy, for which he will be remembered.
Posted by Sergeant Anna Rose at 2:07 PM


﻿ ﻿
On May 25, 2014, shortly after 3:00 p.m., the United States Park Police Aviation Unit received a hoist rescue request from Montgomery County Fire for two persons stuck in the rapids near Little Falls dam. The first victim was a female who ended up on the rocks and got stuck; the second victim was a Good Samaritan who attempted to assist the distressed female and also got stuck on the rocks.

Attempts were made by the Fire Department boats; however, their efforts were hampered as they could not navigate the rocks due to unstable and dangerous conditions. The victims were getting exhausted, increasing the potential for them to be swept away. USPP Pilot Sergeant Chittick and Rescue Technician Officer Abate conducted a hoist rescue on the stranded individuals and safely dropped them off on land to an awaiting U.S. Park Police patrol unit, Officer Al-Saigh. No injuries were sustained by the victims during this incident.

Further investigation determined that the male Good Samaritan was identified as a White House intern who did not know the female swimmer, yet he risked his own life to attempt to rescue another. His chivalry did not end there, as once USPP Eagle One was overhead, he assisted the female victim in getting in the rescue basket, to let her get rescued first.
﻿﻿﻿ ﻿﻿﻿
Posted by Sergeant Anna Rose at 5:35 PM

The Road to Hope

﻿﻿ ﻿﻿ United States Park Police Officer Ryan Pangretic is a proud member of LEU (Law Enforcement United), an organization founded upon and committed to honoring officers who have died in the line of duty.

Officer Pangretic was among hundreds of other riders who traveled on bicycle from Chesapeake, VA on May 10, 2014 arriving in Washington, DC on May 12, 2014, totaling over 250 miles to honor "Fallen Officers" killed in the line of duty. The ride is called "The Road to Hope" and LEU supports C.O.P.S. (Concerns of Police Survivors) and ODMP (Officer Down Memorial Page) through the generous donations collected by each rider/member.

Officer Pangretic rode in honor of Fallen FBI Hostage Rescue Team (HRT) operator Christopher Lorek, who was killed in the line of duty along with his partner FBI HRT operator Steve Shaw. Both Special Agents were tragically killed during a training accident on May 17, 2013.

The U.S Park Police gave a warm welcome to LEU and supported the mission by hosting the memorial service along with the National Park Service on May 12, 2014.
Posted by Sergeant Anna Rose at 3:40 PM