The United States Park Police is investigating several thefts from vehicles that were parked in the Good Luck Road parking area of Greenbelt Park.

These offenses occurred from April until August of 2009.

The investigation has located several store videos of people making purchases with credit cards stolen from these parked vehicles. The identity of these suspects is not known.

Reward money will be provided to anyone providing information leading to an arrest and conviction for these offenses. 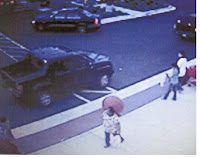 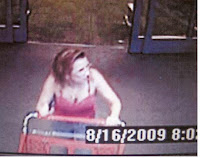 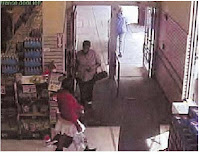 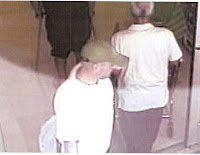 Again we reflect on an Officer who gave his life serving with the United States Park Police.

September 25 marks the anniversary of the loss of Officer Michael Petrella.

Officer Petrella was killed in a motorcycle accident on Memorial Bridge in Washington, DC, during a period of rain. His motorcycle struck the side of a car next to him. He was transported to George Washington Hospital where he succumbed to his injuries.

Officer Petrella had served with the agency for 6 years. He was survived by his wife, two sons, and mother.
Posted by Sergeant Anna Rose at 8:16 AM

Several streets will be closed on Sunday September 13, 2009 to accommodate a Triathlon in Washington, DC.

12:00 am - Ohio Drive between West Basin Drive and Inlet Bridge will be closed

5:00 am - Ohio Drive at Independence Avenue will be closed with an anticipated reopening at 6:00 pm

6:00 am - Independence Avenue will be closed from 23rd Street to 15th Street SW

6:00 am – Rock Creek Parkway from 23rd Street to Virginia Avenue

6:50 am – Rock Creek Parkway from Virginia Avenue to Calvert Street

6:50 am – The Clara Barton Parkway and Cabin John Parkway inside of the Beltway

Roads north of Independence Avenue will reopen at 11:30 am

At 1:30 pm, with the exception of Ohio Drive, all other roads will reopen.

United States Park Police Officers will be on scene to assist motorists and pedestrians.
Posted by Sergeant Anna Rose at 8:20 AM

On August 28, 2009 the United States Park Police held the 9th Annual Charity Golf Tournament to honor members of the Force that have had cancer and lost that fight. All money raised during the event goes to Johns Hopkins Cancer Research Hospital. In the nine years since the inception of the tournament, the United States Park Police has raised and donated over $150,000 dollars for cancer research at Johns Hopkins.

In addition to the annual golf tournament, this year a local Harley Davidson distributor donated a 2009 Harley Davidson Street Glide motorcycle for raffle. The drawing was held at the conclusion of the tournament during the awards banquet. The chairman of the golf tournament, Sergeant Franz Ferstl, asked a cancer patient from Johns Hopkins, Zoe Boone, to come to the tournament and draw the winning raffle ticket for the motorcycle.

Zoe Boone was diagnosed with Leukemia when she was 6 years old and was fortunate to have a bone marrow match with her sister, Maxine. After the transplant, Zoe spent an entire year in the hospital recovering. Doctors are hopeful she will be in remission soon. Zoe lives with her dad Vincent and sister Maxine in Bowie, Maryland. She is very serious about her school studies and her future. Zoe hopes to one day join the WNBA as a professional basketball player as well as pursue a career as a famous fashion model and designer.
Posted by Sergeant Anna Rose at 10:48 AM

Love On The Rocks

Two local residents had a rocky start to their future together.

While hiking the Billy Goat Trail in Great Falls Park in Potomac, Maryland, on September 6, 2009 the couple paused to admire the beautiful scenery. The setting was perfect on a late summer day with the sun glinting off the Potomac River below, the breeze pushing through the thick tree canopy, and the grey rocky trail weaving up and down with steep crevasses and a long drop to the water.

The setting was perfect for a hike, but also for more romantic purposes…

Without question many couples have become engaged in this area, however, this engagement also engaged the services of the Montgomery County, Maryland Department of Fire and Rescue Services and the United States Park Police Aviation Section.

The bride to be was swept off her feet.

After the magic moment, she slipped on the rocks and fell a short distance. This fall left her with head and chest injuries.

Montgomery County Fire medics could only reach her by boat followed by a scramble up a steep rock face. After the medics evaluated the patient and packaged her on a back board and stokes basket, they realized that she would either need to be lowered down the steep rocks or carried over a mile of rough terrain. Neither option was good considering her injuries.

Eagle 2 with Sgt. Kevin Chittick in command, Sgt. Ken Burchell as co-pilot, and Sgt. Chris Perkins working the medic/rescue technician position responded to perform a hoist rescue of the patient.

Hoist rescues are difficult and dangerous as the aircraft must remain at a hover with minimal movement that would injure the patient. Should an engine failure happen, the pilot has few options for recovery with no forward air speed on the aircraft. Despite these dangers, United States Park Police Aviation practices this skill and the personnel are well equipped to perform a hoist.

The patient was hoisted aboard Eagle 2 and transported to Suburban Hospital in Bethesda, Maryland.

An adult female was treated for head and chest injuries and later released.

The injured woman slipped on the rocks even though she was properly attired for rough hiking wearing appropriate footwear and clothing. It was simply an accident.

Prior to her fall this woman answered the question posed to her.