Several roads will be closed on Sunday May 30, 2010 to accommodate the “Rolling Thunder” event.

At about 11:30 am, the following roads will be closed. They are expected to be reopened at about 3:30 pm.

There will be United States Park Police Officers in all of these areas to assist motorists and pedestrians.

Visitors to areas affected by these closures, such as the National Mall and the Monuments and Memorials will find public transportation to be the best method to arrive. These visitors should allow some extra time for their trip.
Posted by Sergeant Anna Rose at 8:06 AM

With an average of 8 fatal traffic crashes a year on the Baltimore Washington Parkway, the United States Park Police is increasing enforcement for seatbelt usage on this roadway.

Traffic Safety Unit Crash Reconstructionists have identified a lack of seat belt usage as a major factor in about half of these fatal crashes.

We firmly believe that a combination of education and enforcement will assist in reducing this toll.

The rate of compliance with seatbelt usage in Maryland, at 94%, is the highest on the East Coast.

The Baltimore Washington Parkway has a compliance rate slightly lower than Maryland’s average at about 90%.

Unbelted passengers die in traffic crashes because they are ejected from vehicles or are severely tossed around inside crashing cars.

Seatbelts will save lives.

Those refusing to use seatbelts claim a false sense of security because their cars have airbags. Airbags are a supplemental restraint system - just that, a supplement-not the whole safety package.

Some refuse to use seatbelts because they fear being trapped in a crashed car.

This is simply misplaced logic.

Should you be involved in a serious crash, your chances for survival are substantially increased if you wear a seatbelt.

Wearing a seatbelt costs nothing; receiving a ticket for not wearing one will cost you.

Crashing a car without a seatbelt may cost you and your friends and family everything.
Posted by Sergeant Anna Rose at 7:56 AM

United States Park Police Detectives are looking for a suspect who shot and wounded a motorist on the Baltimore-Washington Parkway.

Shortly after 11:00 pm on Sunday May 23, 2010, a motorist driving a red sedan struck another vehicle from behind. The operator of this striking vehicle, after rear ending the other vehicle, fled the scene of this crash. This crash happened on Maryland Route 198 west of the Baltimore-Washington Parkway.

After fleeing the scene of the crash, the striking vehicle entered the Baltimore-Washington Parkway southbound from Route 198. The vehicle that was rear ended followed the fleeing vehicle onto the Parkway.

The operator of the fleeing vehicle was shot several times in the arm. This adult male sustained NON-life threatening injuries. The adult male passenger in this vehicle was not injured.

The vehicle containing the shooter may be an SUV and it may be black in color. 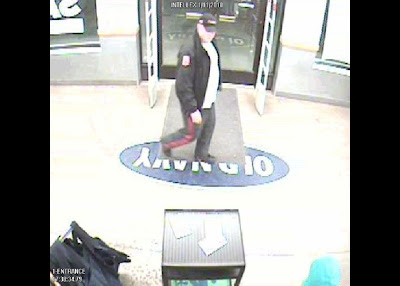 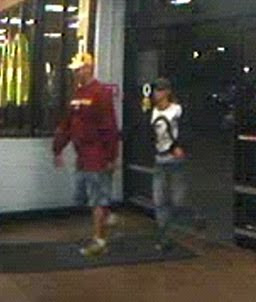 The United States Park Police Criminal Investigations Branch is investigating a Theft from Auto that happened in Greenbelt Park on August 16, 2009.

Credit cards were stolen from a parked car.

These credit cards were used in several stores in Silver Spring, MD and Greenbelt, MD.

The suspect we are looking for was video taped by store security cameras using the stolen credit cards.

We are looking to identify a white male appearing to be 30 – 40 years old, heavy set, and possibly balding or having a very short hair cut.

Anyone with information about this offense or the pictured individual is asked to contact the United States Park Police Tip Line at (202) 610-8737.
Posted by Sergeant Anna Rose at 7:51 AM 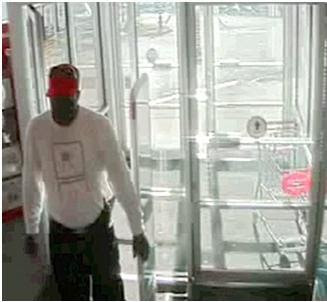 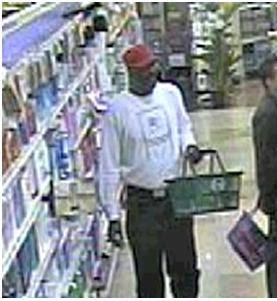 The United States Park Police Criminal Investigations Branch is seeking a suspect who has used stolen credit cards and checks.

These credit cards and checks were stolen from a parked car on Saturday March 6, 2010. The car was parked at the Thompson’s Boat Center Parking Lot which is located near the intersection of Rock Creek Parkway and Virginia Avenue NW Washington, DC.

The photographs were developed from video in the stores in which the suspect apparently used the stolen credit cards.

Anyone with information about this offense or the suspect is asked to call the United States Park Police Tip Line at (202) 610-8737.
Posted by Sergeant Anna Rose at 7:16 AM 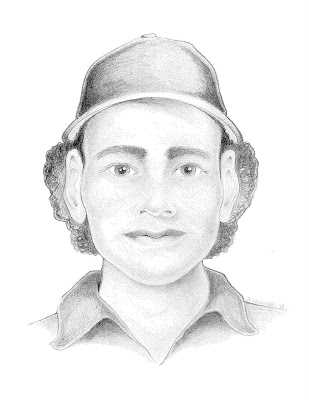 The United States Park Police Criminal Investigations Branch is seeking a suspect wanted for a sexual assault that happened in Rock Creek Park.

This assault happened on the Holly Trail, which is a trail through the wood in Rock Creek Park near 16th Street and Holly Street NW.

The United States Park Police is seeking an Hispanic male in his twenties with a dark complexion. This suspect is about 5'6" tall and slender build. He has dark curly hair. He was wearing a blue polo shirt, blue jeans, and a black ball cap with a white emblem on it. He also was riding a black mountain bike.

Anyone with information about this crime is asked to call the United States Park Police Tip Line at (202) 610-8737. Information left in languages other than English can be translated.
Posted by Sergeant Anna Rose at 2:35 PM

Every year we join togethor at Saint Patrick's Church in Washington, DC to celebrate the lives of those who made the supreme sacrifice in law enforcement.

Command staff, line officers, honor guards, mounted units, motor units, and pipe and drum units from all of the area police and law enforcement agencies present a moving and dignified image for those who share the sense of loss to our community.

While the officers and the public can see the pagentry, we are here for those who watch from above, those who are our eternal back up.

As the service begins and the units march into postition, many passers by inquire as to what is happening. The response they make upon learning is a solemn glance at these units, a slow nod, and a sincere thank you. 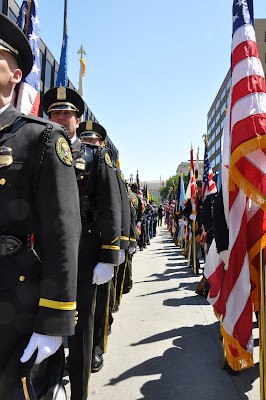 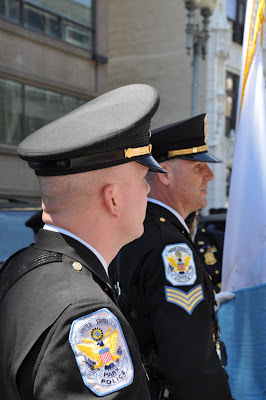 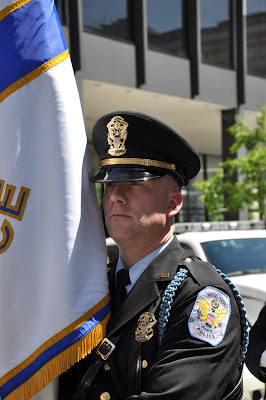 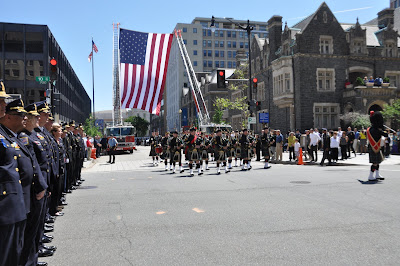 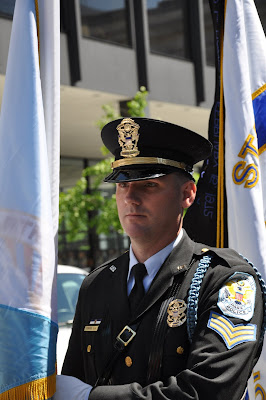 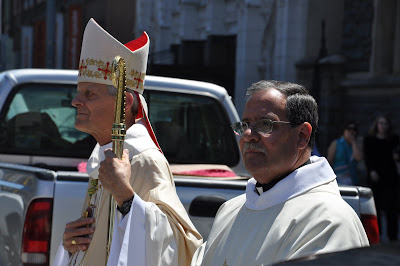 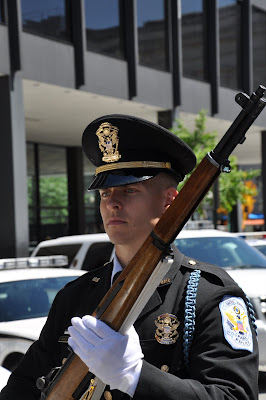 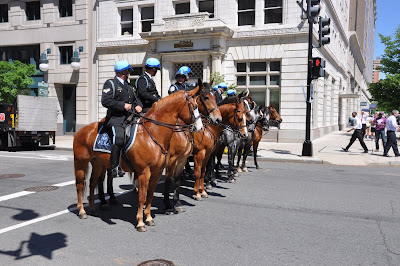 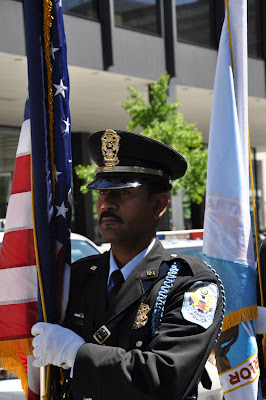 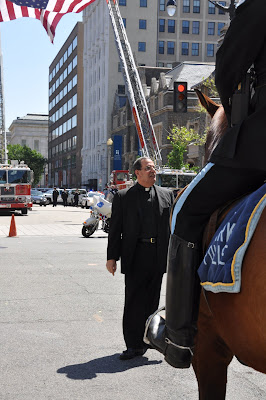 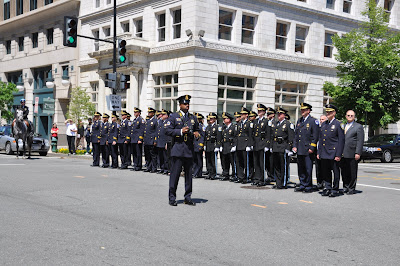 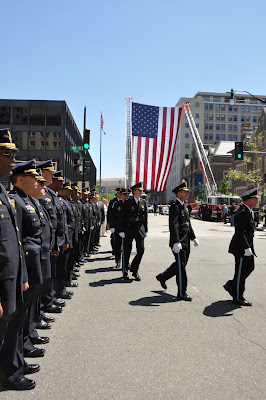 It is no different for First Responders.

The United States Park Police Aviation staff trains on an ongoing basis with partners from the agencies we work with daily.

On May 2, 2010, the District of Columbia Fire Department, Washington, DC Police Department Harbor Patrol, and the US Park Police Aviation conducted water rescue training in the Anacostia River.

For this drill, a vehicle was submerged upside down with people trapped, and another victim floating away.

The Police and Fire boats responded and deployed divers for the rescue. US Park Police Aviation arrived to hoist a victim from the waters.

The Aviation staff made a sucessful recovery with a hoist operation into the aircraft.

United States Park Police Aviation has a long history of difficult rescues resolved well. These pilots and paramedics have rightfully received significant recognition for these operations.

They play the way they train.

This training session was done on a hot and steamy morning. The EMS providers will tell us that proper hydration is critical to good health. That includes our canine partners with the DC Fire Department Search and Rescue Unit! 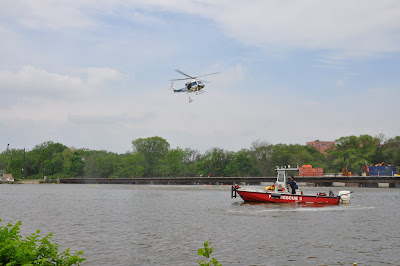 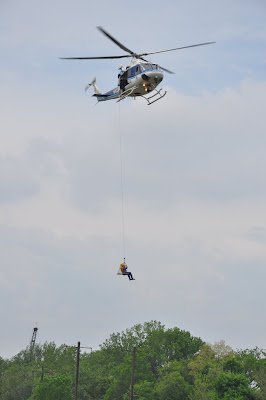 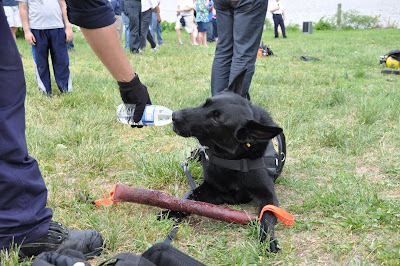